Originally from Aurora Ontario, Olivia Arcangeli began her dance training studying ballet, Jazz and Modern. Later, Arcangeli found herself at The School of Toronto Dance Theatre where she graduated in 2018. Arcangeli was also involved as an assistant to Michelle Silagy in We Dance; a dance project celebrating differently abled movers. She performed one for five, choreographed by Kristen Innes Stambolic as part of Summerworks Performance Festival 2018. Summer programs she has attended include Dance Italia, TransFormation Danse, Peggy Baker Dance Projects August Intensive, and Dance Ability International Teacher Intensive Course. She has worked with choreographers including Tedd Robinson, Sharon B. Moore, Julia Sasso, and Peggy Baker. More recently, Arcangeli co-produced a show entitled Fuse, where she created and performed a piece. She is an assistant teacher in the Young Dancer’s program at The School of Toronto Dance Theatre and has recently finished her Yoga teachers certification.

Morgyn began her dance training in Edmonton, Alberta at Victoria School of the Arts, where she graduated with an International Baccalaureate dance certificate. She then studied at the School of Toronto Dance Theatre where she was awarded the Walker Wood Foundation and Lindy Green & Sam Chaiton bursaries and graduated in 2019 as class valedictorian. Following graduation she travelled with her class to Mexico for a residency with La Escuela Profesional de Danza de Mazatlán. She has worked with Frog in Hand, Kaeja d’Dance, the Citadel + Compagnie, Human Body Expression and has performed in Nextfest, the Toronto and Edmonton Fringe Festivals, InSitu, Dance Ontario DanceWeekend, SummerWorks and the Festival des arts de Saint-Sauveur. She recently joined Wind in the Leaves Collective as a dancer/ collaborator for an upcoming project titled Gay Guerilla and is in rehearsals for a new work choreographed by Laurence Lemieux, set to premiere in November 2020. Morgyn is extremely excited to be one of tiger princess’ Assistant Facilitators as she finds arts education invaluable for young people.

Janaki Banting is a mover, musician, and obsessive reader. She received a BFA in Contemporary Dance from Concordia University in 2013 where she had the opportunity and pleasure of collaborating with many wonderful artists, including Kerwin Barrington and Emily Leblanc. She also studied dance in Calgary with Decidedly Jazz Danceworks in 2014. Some of her favourite opportunities to perform in Calgary were those with RocketHouse Productions. In Toronto she participated in Anandam Dance Theatre’s presentation of ‘Glaciology’ at Nuit Blanche (2015) and was a performer and rehearsal director with Ismailova Theatre of Dance until 2017. Throughout her dance career, she has been most interested in work that is site-specific, interactive, and a little bit improvised.

In addition to her work with Swallowing Clouds, she is currently pursuing a Red Seal certificate in horticulture and creating what she likes to think of as ‘plant choreography’.

Yiming Cai is a dance artist from Singapore. Cai grew up competing in Wushu and started dancing while completing his bachelor’s degree in Communication Studies at the Nanyang Technological University. Cai went on to dance in The Human Expression Second Company and moved to Canada in 2016 to study at The School of Toronto Dance Theatre. He has since also worked on projects with Tiger Princess Dance Projects, The Platform, JDdance, Danny Grossman dance company, Little Pear Garden dance company, Sharon B. Moore, Sashar Zarif and Jane-Alison Mckinney. Cai has also participated in intensives such as One Body One Career, Gaga, Alias Dance Projects and Springboard Danse Montreal; where he performed in the creation of MA.ZE (Hungary) and the repertory of Göteborgsoperans Danskompani under the direction of Stephan Laks. Cai is currently based in Toronto and enjoys a quiet lifestyle outside of dance.

Irvin Chow graduated with a BFA in Dance at York University. Through the years he has toured across Canada and internationally working with many choreographers such as: Angela Blumberg, Sylvie Bouchard, Jasmyn Fyffe, Robert Glumbek, Michael Greyeyes, Terrill Maguire and Yvonne Ng. Irvin has had the pleasure of performing in David Earle’s, Miserere, in the Toronto Heritage Dance project as well as in William Yong’s Harbourfront Centre’s World Stage show, vox:lumen. He has worked with Christopher House’s as part of Toronto Dance Theatre in 2015 and was honoured to dance for Julia Sasso again in the remount of her much-acclaimed work, Sporting Life. Irvin’s latest performance was with tiger princess dance projects in Time Travel while Standing Still and looks forward to working with them more this season. Irvin has been working with tiger princess dance projects since 2012.

Mairéad Filgate (Toronto/Montreal) has performed extensively throughout Canada, and to Europe, U.S.A., China, and Mongolia. She was a member of the Danny Grossman Dance Company, and has since performed with tiger princess dance projects, Public Recordings, Dusk Dances, BoucharDanse, Chartier Danse, Bill Coleman, and Kaeja d’Dance, among others. Mairéad creates choreography both independently and collaboratively. As a founding member of Throwdown Collective, she presented work at Jacob’s Pillow Festival, (MA); Sony Centre (Fall for Dance North); and received a Dora Mavor Moore Award for Outstanding Choreography (2016). Mairéad makes regular sojourns to New York City to study the work of Trisha Brown. She holds a Bachelor of Arts with High Distinction in Women & Gender Studies and Sociology from the University of Toronto, served as Chair for the Board of Directors of the Canadian Alliance of Dance Artists (2016-2018) and is a K.M. Hunter and Johanna Metcalf Performing Arts Award nominee.

Meredith Kenny is a Toronto-based Producer, Designer, and Educator, working in the worlds of animation, dance and martial arts. A BFA graduate of York University’s Film and Theatre programs, Meredith has been joyfully working with Yvonne Ng since 2004. She is currently a Facilitator for the Swallowing Clouds physical arts program. In the world of animation, Meredith has worked on stop-motion, CG and 2D projects. Currently, she is the Producer for Xavier Riddle and the Secret Museum, a 2D television series based on the children’s book series, Ordinary People Change the World. After falling hopelessly in love with capoeira in 2006, Meredith has travelled to Brazil several times to study the martial art, deeply rooted in the music and culture of Bahia. The senior student of Professora Lang in Filhos de Bimba Capoeira School Toronto, Meredith has been teaching capoeira classes since 2010.

Shahla Lafeer is a Bachelor of Commerce Candidate who is currently studying at Ryerson University for Global Management Studies and French. In recent years, Shahla has taken part in Toronto-based arts organizations including All-City Band and Orchestra as well as Darearts Foundation for Children, which greatly influenced her love for the arts and its’ positive effect on the lives of children – giving them the opportunity to nourish and develop into positive role models. As a teen, Shahla was given the opportunity to work at Eastview Neighbourhood Community Centre as a Children’s’ Program Worker, where she grew a great passion for working with children. During her years of working with children, Shahla became determined in helping them along their journey of finding their true passions and personal successes. During her years as a Children’s’ Program Worker, Shahla was able to grasp onto the fundamental leadership skills needed to direct and maintain programs for children that enabled for intellectual and mental growth, which lead to her involvement in the Swallowing Clouds Program. Shahla hopes to continue her positive involvement in creating a better and safer tomorrow for the children of today!

“Working with children is such a blessing. I am constantly reminded of how beautiful and youthful life is and I cannot thank them enough for the positive perspective they have introduced me to. Children are the flowers of tomorrow. With some love and care, they will blossom into amazing individuals with strong personalities.”

Marie Lambin-Gagnon, originally from Montreal, trained at Ballet Divertimento and The School of Toronto Dance Theatre. She has participated in workshops such as the Gaga Summer Course in Tel Aviv, Morphing/Evolution with Compagnie Marie Chouinard, and Springboard Danse Montreal, where she worked with RUBBERBANDance Group, directed by Victor Quijada. In January 2013, Marie collaborated with Quebecois choreographer Robert Desrosiers, who created a new solo on her presented at the King Edward Hotel in Toronto. She has worked with Shannon Liztenberger, Robert Abubo, ReActive Dance Theatre, is part of the collective The Garage and NewFoundDance. She has presented her choreography at Nuit Créative and Series 808. A recent piece, ‘’WTF’’ has been presented for Danses Buissionières, the 2015 Rhubarb Festival and the Festival Vue sur la Relève. Her most recent work-in-progress, ‘’Here, a celebration of failure’’, was showcased at Octopus Garden Yoga Centre in December 2014.

Erin Robinson is a poet and interdisciplinary artist. Rag Cosmology, her debut collection of poetry, is forthcoming with BookThug in spring 2017. She is also the author of four chapbooks, and her work has appeared in numerous journals, including The Capilano Review, Canadian Xtasy, Dandelion, The Goose, Regreen: New Canadian Ecological Poetry; Tag: Canadian Poets at Play and onstage at the &NOW Festival of New Writing, The Conference on Ecopoetics, and many others. Recent / upcoming performance works include This ritual is not an accident and Trading Power (2017) with choreographer Andréa de Keijzer. She won the Irving Layton Award for Poetry at Concordia University, and has been nominated for a KM Hunter Award. Originally from Cortes Island, BC, Erin lives between Toronto & Montréal.

Kaitlin Standeven is an independent contemporary dance artist living and working in Toronto. She is deeply motivated by what transpires when ideas and bodies come together. Most recently Standeven has engaged in projects with Allison Cummings, Marie Lambin-Gagnon, Yvonne Ng, BoucharDanse and Citadel + Compagnie. Standeven began her career as a member of Toronto Dance Theatre. Over eight seasons she originated roles in five full-length works by Artistic Director Christopher House, and was also greatly influenced by the thinking of notable creators Susie Burpee, Deborah Hay, Ame Henderson and Heidi Strauss. Her work now extends beyond performance as she aims to support, nurture and inspire through her multiple roles as a teacher, facilitator and administrator. Standeven holds a BFA from Ryerson University.

Brandon Miguel Valdivia is a drummer, percussionist, flautist, composer based in Toronto. His current musical projects are Not the Wind, Not the Flag, Mas Aya, Above Top Secret, the Cosmic Range, 2017 Polaris Prize winner Lido Pimienta and has recorded with prominent Canadian artists such as U.S. Girls, Glenn Buhr A Tribe Called Red, Shad and 2018 Polaris Prize winner Jeremy Dutcher. He has worked on live music accompaniment and sound design for theatre and dance with artists and companies such as Lilia Leon, Jumblies Theatre, Clay and Paper Theatre, Red Snow Collective and most often with Aluna Theatre. He is passionate about musical and interdisciplinary work that is innovative, inclusive and which endorses cross cultural dialogue and understanding. 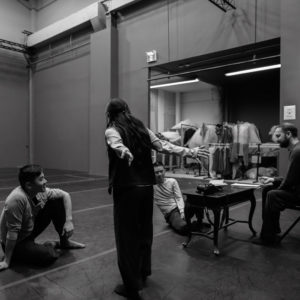 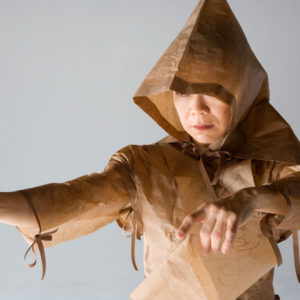 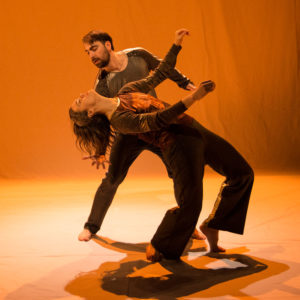 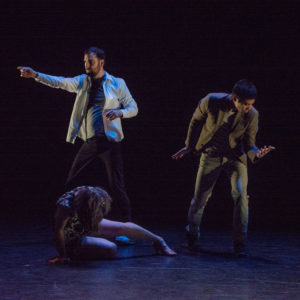 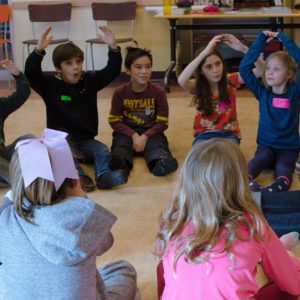 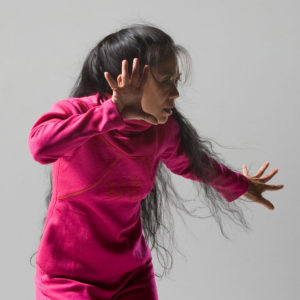