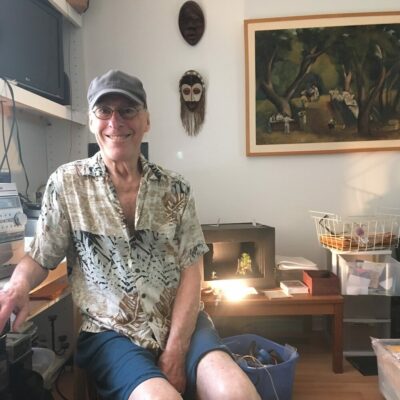 From 2003-08 I was a member of the Danny Grossman Dance Company. I danced for the final years of this iconic and influential company and had one of the last opportunities to be a full-fledged company member in a company structure that is fast becoming obsolete in contemporary dance. Danny’s company was one of the first in Canada and one of the most beloved. Over its 30-year history the Grossman Company toured nationally and internationally with an incredible group of artists in work that was entertaining, political, and ground breaking for its time.

The company attracted an incredible group of humans into its midst: eccentric, talented, generous, political people, authentic to the core and with a deep sense of commitment to Danny and the work. They were also fantastic storytellers, always up for a good time. I remember this well as I was taken into the fold of this dance family. Not unlike the desire to explore one’s family roots, I have felt a similar pull to uncover the lineage of my dance roots. Over the past year, with the support of the Canada Council for the Arts, I have conducted interviews with original and early company members, Danny’s students, managers, funders, and audience members, who were part of, or witnessed, the birth of the company.

It is a winding road. Like a detective I collect threads that lead me down new paths, seeking out people it can be a challenge to find, even on the information highway. Memory is slippery – there are contradictions, blurriness, and large
gaps. But the multiplicity of voices allow for gaps in one person’s memory to be filled by another’s. Some recollections overlap, there are variations, and each individual offers a unique perspective.

Certain facts that can be verified by official documents, yes, but I am most interested in the variance and texture of personal stories. Even the seemingly mundane and irrelevant reveal so much, not only about the entity of the company, but about the social and political context that created the conditions for the company to thrive – one that has changed dramatically in only a few decades. The collected views and stories are, for the most part, glowing, but critiques and difficult times are also recounted. Great things do not come about without trials, and for me, embracing all angles allows me deeper and fuller
understanding.

With so much lost and unsettled in our present world I am grateful to be able to dive into this work, an equal passion to performing. Reflecting on the bigger picture and my place within it helps me to make sense of it all.

Mairéad Filgate (Toronto/Montreal) has performed extensively throughout Canada, and to Europe, U.S.A., China, and Mongolia. She was a member of the Danny Grossman Dance Company, and has since performed with tiger princess dance projects, Public Recordings, Dusk Dances, BoucharDanse, Chartier Danse, Bill Coleman, and Kaeja d’Dance, among others. Mairéad creates choreography both independently and collaboratively. As a founding member of Throwdown Collective, she presented work at Jacob’s Pillow Festival, (MA); Sony Centre (Fall for Dance North); and received a Dora Mavor Moore Award for Outstanding Choreography (2016). Mairéad makes regular sojourns to New York City to study the work of Trisha Brown. She holds a Bachelor of Arts with High Distinction in Women & Gender Studies and Sociology from the University of Toronto, served as Chair for the Board of Directors of the Canadian Alliance of Dance Artists (2016-2018) and is a K.M. Hunter and Johanna Metcalf Performing Arts Award nominee.